Getting to Know Darren Powell 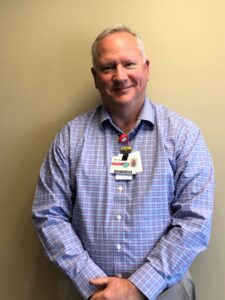 Applications are something we use every day. Whether it’s an app on our phone that lets us video chat with our families or an app we use at work to track patient statuses or PPE usage, application technology is rooted in our everyday tasks and leisure. Meet the man responsible for the strategic planning and service delivery related to all IT applications at UofL Health – Darren Powell.

Darren is the associate vice president of Application Services. Born and raised in Louisville, he joined the former Jewish Hospital Healthcare Services in 2000 starting as an integration analyst. In addition to several leadership positions along the way, he later became an IT business relationship manager, acting as support to the local legacy KentuckyOne Health locations.

Before starting his current role, Darren was the director of Clinical Systems and Integration. He managed teams that support Cerner and would work with his team to build interfaces (ways for two pieces of tech to “talk” to each other) between applications.

When UofL Hospital and the Brown Cancer Center left the joint operating agreement with legacy KentuckyOne Health in 2017, Darren had the unique opportunity to be a part of the original team that would be the first group of UofL Health IT staff.

“I was able to come in on the ground floor in 2017 and be a part of standing up an IT department from scratch,” Darren said. “From there, we’ve been able to grow with the organization and contribute to it becoming a system.”

It wasn’t just the opportunity of a lifetime to create a new IT team that intrigued Darren the most about our organization. He also liked the idea of forming and being a part of the beginnings of a new health care system and plotting the initial points for our future.

Darren’s responsibilities have grown just as the organization has grown. Initially, he was responsible for Integration Services, with him and his team managing the migration of more than 200 interfaces from the legacy KentuckyOne Health/CHI platforms to our UofL Health interface. He has also taken on the responsibility of managing the Cerner application support team.

“We recently rolled out Cerner to all legacy KentuckyOne Health facilities, which makes it much easier for our staff to exchange information between our different locations,” Darren said.

Our newest IT application, Epic, is specifically for our UofL Physicians team members and providers. Darren is also responsible for the service and management of Epic for UofL Physicians.

“Epic is a fully integrated electronic health record (EHR) system that went live earlier this year,” Darren said. “It replaced the old UofL Physicians Allscripts system – not including the inpatient Cerner system. It was a massive undertaking for our IT team and our providers, but now our systems can be more integrated with one another.”

Darren’s goal for his team is to deliver the best application services possible for UofL health. To him, this means ensuring we have a high-performing and motivated team that can respond to the organization’s needs as well as our patients and users.

When he is not managing our applications, you can find Darren with the latest edition of a woodcraft magazine or listening to the Freakonomics podcast – a radio show that tells you things you always thought you knew (but didn’t) and things you never thought you’d want to know (but do). He’s also patiently awaiting the fourth season of Ozark on Netflix.

If you’re thinking of bringing in breakfast for Darren’s team, be sure to order an extra plate of biscuits and sausage gravy. If they’re out of biscuits, that’s OK; just bring him the gravy and he’ll be happy.

“Come Monday” you might hear Darren humming the chorus of “Margaritaville” or “Son of a Son of a Sailor.” He, like our CEO, Tom Miller, is a Parrot Head – a fan of Jimmy Buffet music. He would love to instantly learn to sing better, but, for now, he’ll stick to his commute to and from work for his concerts.

Those who know Darren best know he is always smiling. That’s because lives by the phrase “Keep smiling. They will think you are up to something!”

The next time you use Epic, Cerner or one of our other IT applications (besides the clinical ancillary applications), you’ll think of Darren and his team. If you run into issues with any of your applications, submit a Service Desk ticket at ServiceDesk@UofLHealth.org.

If you happen to see him out and about, be sure to wave, say “hello” and introduce yourself to your associate vice president of Application Services. Darren would love to get to know you.