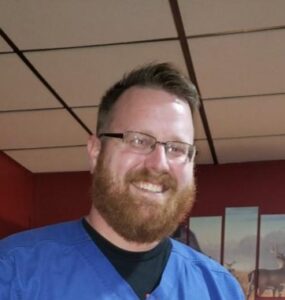 Jesse has been with the system since 2011. What he appreciates most during his 10 years here is the way we care for some of the sickest patients in the city and are part of cutting-edge research and procedures.

When deciding to join the UofL Health team, it was a great opportunity of chance. “UofL Health was the only organization that was willing to take a chance on me, giving me the opportunity to become a PCA,” Jesse said. “I have stayed with the company because of the people I have had the privilege of working with, the work I have been able to accomplish and the professional growth I have experienced.”

As a nurse manager, Jesse impacts UofL Health in many ways. As a leader, he has the chance to impact direct patient care through his team and gets to be involved in process improvement as well as practice/procedure development. Being a manager, he is involved in many aspects of our organization.

When asked about his goals for UofL Health, Jesse has but one goal in mind: to remain humble while becoming the leading health care system in the city and the region.

“In 2011, I was a veteran struggling to transition during difficult economic times,” Jesse said. “I had been given an opportunity to work as a PCA at UofL Health – UofL Hospital on a Med Surg/PCU floor. I truly felt like I had a place where I could professionally transform myself with the support of nurses, managers and organizational leadership.”

Jesse recalls seeing the previous president of UofL Hospital, Jim Taylor, walking the halls at all hours—day and night—speaking to staff like they were old friends. That experience helped shape his leadership principles and how he interacts with his team.

As previously mentioned, before Jesse joined the UofL Health team, he was in the military as an M1A1 armored crew member (tanker). He then became a registered nurse with UofL Hospital, initiating his first health care job as a PCA on 8 South. Even though being in the military may have moved him around, his home sweet home is Spirit Lake, Iowa.

“The only thing you have in this world is your word. You better do what you say you’re going to do” a piece of wisdom that Jesse goes by, as well as one of his pet peeves with others pet peeves.

Outside of work, Jesse enjoys spending time with his daughter. Currently, they are watching the “Good Doctor”.

If you catch Jesse enjoying a Matt’s Deluxe for breakfast, don’t be shy, ask which fillings he picked today! As it consists of a loaded omelet with all the fillings you could possibly imagine, hashbrowns with cheese on the bottom layer and is topped off with a large helping of sausage gravy.