Getting to Know Jaimie Hanifen 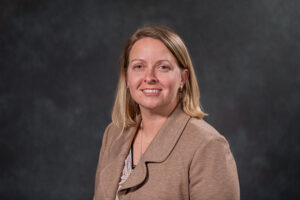 Jaimie started working with UofL Health in 2006 as a medical assistant in a primary care office. She went on to serve as the office manager and the payor relations and contract manager. Jaimie rejoined the organization in September 2021. In her current role, she monitors federal regulations and guidelines to ensure UofL Health stays in compliance. She also works to educate our organization on topics such as privacy, the Emergency Medical Treatment and Labor Act and the Occupational Safety and Health Administration.

Jaimie’s role plays a big part in ensuring the current and future success of UofL Health. Her responsibilities help promote, educate and prevent actions that would exclude UofL Health from government programs and assist in the safety of our employees and patients.

When reflecting on her time with UofL Health, she says she is most proud of the compassion and dedication you can see and feel as you walk around our different locations and facilities.

“You can tell so many of our employees are here because of the patients,” Jaimie said.

Her goal is to help form an environment where employees and patients feel safe, especially when it comes to speaking up and creating change. She feels this is the best way to make a positive impact on our organization and community.

“I want to create a culture that allows people to feel safe and trusted to come forward and report incidents or concerns without retaliation,” Jaimie explained.

Jaimie enjoys working to better the state and community she grew up in. She grew up just 20 minutes from downtown Louisville and is an Iroquois High School alumnus. She later attended Sullivan University for her associate’s and bachelor’s degrees in business management and health care administration.

If it were up to Jaimie, she would eat cooked vegetables every day for the rest of her life. But since she has options, eggs and toast are another favorite alternative.

She loves singing along to “Drunk (And I Don’t Want to Go Home)” by Elle King and Miranda Lambert in the car. When she’s looking for a blast from the past, her go-to song is “Work It” by Missy Elliot.

If you see Jaimie out and about, be sure to say “hello” and introduce yourself. She would love to get to know you!