Getting to Know Greg Brislin 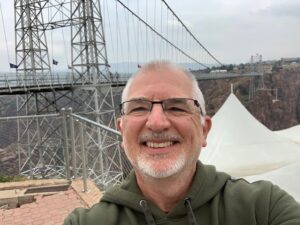 Greg Brislin, MS, works for UofL Health as a chest pain coordinator at UofL Health – Jewish Hospital. In this role, he oversees the STEMI process and ensures quality measures are taken in treating patients with heart problems.

Greg’s career began nearly 30 years ago. During that time, he has worked in several of our organization’s facilities and departments. He has worked at Jewish Hospital, at UofL Health – Shelbyville with the Cardiac Rehab Program, and UofL Health – UofL Hospital on and off during that time. He’s found the people among our organization are his favorite part of his career thus far.

Especially after time apart from our community, due to the COVID-19 pandemic, Greg cherishes the moments spent teaching the public life-saving skills, such as hands-only CPR. You can watch the Red Couch video where Greg models how to perform hands-only CPR here.

Greg used to teach college courses for pre-nursing students and now teaches cardiac care and early actions at local symposiums. He lives out our UofL Health mission by making it a personal responsibility to educate our community about early recognition signs of a heart attack, with hopes this education leads to better health outcomes and reduced repeat patient visits.

Greg works to make UofL Health better by improving measurements and metrics for cardiac patients. He has made it a goal for Jewish Hospital to return to its prime and become the international heart care facility it once was. In the past two years, his team achieved the American Heart Association’s Get with The Guidelines Gold Standard for their high level of care. He is confident the department is consistently growing and improving.

In his personal life, Greg strives for excellence and has a competitive edge. In fact, he worked with the University of Louisville Volleyball team as an assistant coach while studying exercise physiology at the university. He has worked with the National Volleyball Program for 16 years and was the chair of Resource Advisory for USA Volleyball. This interest allowed him to experience the 1996 Atlanta Olympics and conduct research on injury prevention.

Greg spends his spare time jamming out to alternative music and playing the guitar and bass. He and his wife have been to more than 20 Foo Fighters concerts and hope for many more. Greg is a man of many vocations, with a black belt in several styles of martial arts and a growing interest in forging.

If you catch Greg in the hallway, ask him what documentary he’s currently watching or if he’s started season four of Ozark. He’d love to tell you about the British mysteries he’s currently binging.

Attending both Trinity High School and the University of Louisville, Greg has lived in Louisville since he was a young teenager. His mom has been his biggest inspiration, encouraging him to care for and work to better the lives of others.

If you see Greg out and about, make sure to wave “hello” and introduce yourself! He would love to teach you CPR, educate you on the signs and symptoms of a heart attack or just get to know you.