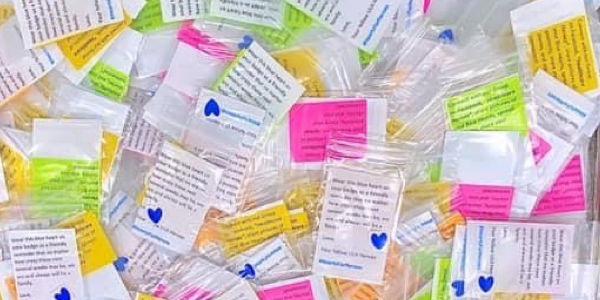 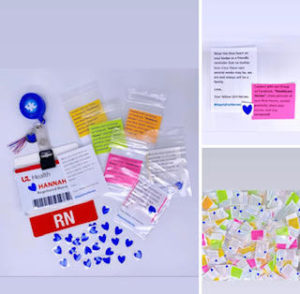 Hannah Fisher, RN, had been creating jewelry to raise money to help with her upcoming radiation treatment for a brain arteriovenous malformation. With the immediacy of the COVID-19 pandemic, she put her jewelry business on hold and found a way to help show support for her fellow nurses at UofL Hospital.

Hannah, along with her friend and fellow crafter, began making hearts health care employees could place on the badges. Her friend, Brittany Ballard is a registered respiratory therapist at Norton Healthcare.

Hannah started by sharing them with co-workers on her unit (5 South) and the initiative began to grow.

From March 24-27, more than 6,000 hearts had been distributed to area hospitals.

“We chose blue because nurses are often identified by their blue scrubs,” Hannah explained.

Although Hannah hopes the hearts can be shared with everyone in health care and those in public service (EMS, police, correction officers, etc.) and their families.

Hannah is a recent graduate of Galen College of Nursing. She dreamed of being a firefighter, but because of her AVM, her doctors suggested another line of work.

“I love the adrenaline rush of firefighting,” she said. “I hope to one day be a flight nurse, but there is certainly a lot to keep me on my toes now.”

She said she’s overwhelmed by the support or co-workers and strangers who have found their way to the Facebook Group she and Brittany started, https://www.facebook.com/groups/2943426445678771/. You can also follow their hashtag, #HeartsForHeroes.

“It’s exciting to see how people have supported this initiative,” she said. “It’s good. It’s overwhelming. But it shows how important it is to help highlight the health care heroes in our organization and hospitals in our city, state and nation.”

“In her original post, she just wanted to show positivity and unity,” Holly said. “I don’t think she had any idea that in just a week, people from New York would be reaching out for blue hearts! How awesome is that? She took something as simple as a blue heart and brought us all together to show unity, just like she wanted. I love looking at the group and seeing people from all over asking for blue hearts. It makes my heart so happy and I can only imagine how she feels. And I get the pleasure of working along side her on 5 South. She is taking a negative time and being a shining light to so many of us.”

Hannah and Brittany are making the hearts, packing the hearts and helping get them distributed. She said through the Facebook Group, others have begun to make hearts and share them with health care heroes in their communities.

She said she’s thankful to have the support of the family and boyfriend.

And UofL Health is thankful to have a nurse like Hannah. Thank you Hannah for going above and beyond and finding a way to bring hope and encouragement to not only our nurses, but health care heroes everywhere.