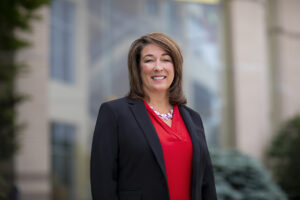 UofL Health is pleased to announce that Dorie Shelburne, MSBC, BSN, RN, has been named the chief executive officer of its planned UofL Health – South Hospital in Bullitt County. Dorie currently serves as vice president of operations and chief nursing officer for UofL Health – Medical Centers East, Northeast, South and Southwest. As vice president of UofL Health – Medical Center South, Dorie has spearheaded and provided leadership to the work to convert and expand the medical center to a full-service acute care hospital with 40 inpatient beds.

“I’m incredibly happy for the opportunity to continue my work to bring an acute care inpatient hospital to Bullitt County,” Dorie said. “For the past two years, we have been working diligently with community leaders and government officials to bring to one of Kentucky’s largest and fastest-growing counties the expanded scope of medical services that its residents need and deserve. It is an honor for me to be named to this role, and I’m looking forward to building both the hospital and long-term relationships within the Bullitt County community and the surrounding region.”

Dorie’s tenure with UofL Health goes back to 1993 when she joined UofL Health – Frazier Rehabilitation Institute as a certified nursing assistant. She continued her education while working and became a registered nurse in 1996, working initially at Frazier Rehab Institute and then in the ICU at UofL Health – Jewish Hospital. Her first leadership role was in 2004 when she became nurse manager for peri-anesthesia care at Jewish Hospital. In 2010, she was promoted to director of nursing at Jewish Hospital, a position she had until being promoted to her current role in 2016.

During her various roles and advancements over the past 29 years, Dorie has built a reputation for developing and implementing strategies to achieve maximum results. The ambulatory services portfolio she leads is one of the most successful within our organization and routinely achieves high-ranking scores in quality, safety and patient satisfaction.

“Dorie’s outstanding clinical and operational performance over the years along with her project knowledge, leadership and relationships in Bullitt County made her an ideal candidate for the new CEO position at South Hospital,” said Tom Miller, CEO of UofL Health. “We’re very pleased to have her at the helm during this exciting time of growth.”

Dorie is a Louisville native and has family ties to both Jefferson and Bullitt counties. She earned her bachelor of science degree and master of business communication degree at Spalding University. She has been active in Leadership Louisville’s Focus program, YPAL’s Emerging Leaders Program and has received numerous accolades for her clinical and administrative leadership at Jewish Hospital and now, UofL Health. She and her husband Gerald live near Mt. Washington and have two adult children, two grandchildren and another on the way.

Dorie’s new position will be effective as of July 10, 2022. She will be part of the leadership team led by Melisa Adkins, EJD, MBA, BSN, RN, chief executive officer at UofL Health – Mary & Elizabeth Hospital.

UofL Health – South Hospital is an evolution of the current UofL Health – Medical Center South outpatient care/ER facility. Located at the Brooks exit off I-65, the hospital will add approximately 100,000 square feet of new space to the existing facility and will include: 40 inpatient rooms (with licensing ability to grow to 84), expansion of the Emergency Department, additional operating rooms, new laboratory and pharmacy, new centralized sterile processing area and expanded guest services including a cafeteria. In addition to more services, the new hospital will create more than 100 new jobs. Positions will include nurses, plus clinical and non-clinical support. New hires and their dependents are immediately eligible for free undergraduate tuition, funded by UofL Health, to the University of Louisville.

The hospital is scheduled to open in spring 2023.