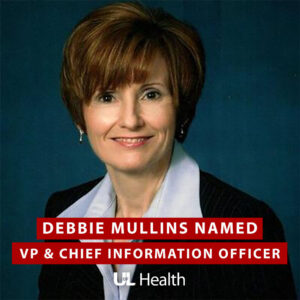 Debbie Mullins has been named vice president and chief information officer (CIO) of UofL Health. Debbie brings more than 28 years of experience in health care Information Technology (IT) to the role and has played an integral part in several of the past year’s UofL Health – IT projects.

In her previous role with UofL Health, Debbie was the associate vice president (AVP) of Applications. In this role, Debbie managed all of the UofL Health application teams, including those involved with Epic, Integration, Cerner and STAR.

Debbie began her career in health care IT working in data processing at Berea Hospital, now St. Joseph Berea in Berea, Ky., when the first computer system was implemented. She later became the Director of IT and then in 2005 transitioned to Director of IT at St. Joseph London in London, Ky. In 2012, she came to Louisville as the executive director of IT for CHI where she first worked with then legacy KentuckyOne Health facilities Jewish Hospital and UofL Hospital before becoming AVP of IT for KentuckyOne Health, supporting the entire division. In 2017, Debbie became the executive director of Applications at UofL Health – UofL Hospital.

One of her favorite achievements throughout her career is the completion of a four-year project to design, build and move to a replacement facility for the London, Ky., hospital. She was heavily involved in the entire process of system implementation, giving her the knowledge and bandwidth of what it takes for a facility to run, tech-wise, from beginning to end.

Outside of work, Debbie enjoys spending time doing outdoor activities, such as hiking and other sports, with her husband or with her two children and three grandsons.

“Over the years, Debbie has shown her skill set and leadership abilities as we have navigated through the many informatics changes in our organization,” Tom Miller, UofL Health CEO, said. “Please express your congratulations to Debbie in the new opportunity within our system.”