Getting to Know Tom Dues, M.D. 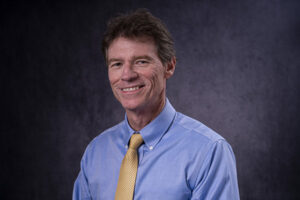 When the Louisville native graduated from Trinity High School, he elected to pursue higher education at the University of Louisville.

“I knew as an undergrad that I was either going to go into medicine or fine arts,” Dr. Dues said.

Ultimately, Dr. Dues chose the medical route. After medical school at the University of Louisville School of Medicine in 1993, he chose to stay at his alma mater and started his residency in internal medicine. He enjoyed his time so much at UofL that, after residency, he chose to stay on as faculty. Dr. Dues came on as a full-time academic hospital at UofL Health – UofL Hospital in early 2001 where he taught internal medicine to students and residents.

In 2002, Dr. Dues was named to a special committee at UofL Hospital charged with the development and deployment of the first electronic health record (EHR) system at UofL Hospital. At that time, EHRs were still a fairly new technology with less than five percent of hospitals being live on an EHR.

“Being on the committee and working to go live with the EHR system is where I really got hooked on the potential benefits and safety provided through clinical applications and computerized provider ordering,” Dr. Dues said.

As part of the project, Dr. Dues and team were able to put in specific provider ordering sets and customized computer pathways. One of these pathways would automatically order appropriate influenza and pneumococcal vaccines when approved and when discharging the patient. Through this defaulted workflow, the flu vaccine rate increased five-fold year over year during flu season.

One of Dr. Dues’ favorite all-time builds is the collaborative design and build of PowerPlans (order sets) for the current updated Cerner domain. When we transitioned to UofL Health, an enormous effort was undertaken to reconcile over 800 order sets built in various domains during the project to migrate to one Cerner system. There were initially multiple different order sets for different disease states across all the facilities from different systems. To complicate matters, different facilities have slightly different order catalogs. Dr. Dues and his team were responsible for creating a singular order set for a single disease state for all Cerner users across the system.

“Creating these PowerPlans were the hardest things I’ve ever done,” Dr. Dues said. “We were trying to navigate the pandemic and really just getting to know the needs of our new facilities – it was just a ton of work for the team, and for me personally. But we finished on time and had complete and thoroughly reviewed order sets for Cerner users.”

Dr. Dues has leaned on his experience in his role as CMIO for UofL Health. As CMIO, he manages our two EHR systems for inpatient and outpatient settings: Cerner and Epic. A core part of his role, and something he really enjoys, is digging into the systems and really understanding how to optimize applications’ capabilities to better benefit our providers and our patients. He also keeps in tune with the latest legislative actions and regulations, including the Cures Act, which, as part of its information blocking rules, enforces access of patients to their medical records.

Recently, Dr. Dues was published in November’s edition of Louisville Medicine for his tips for providers on how best to manage new legislative requirements. His article stems from the 21st Century Cures Act, originally passed in December 2016, which aims to make patient medical records available to patients through patient portals (via an app or online) as soon or as reasonably soon as possible. Dr. Dues’ article helps providers acknowledge and manage the challenges with the Cures Act. You can read the article here.

Even though Dr. Dues has fully transitioned out of his provider role as of last year, he still has companionship and responsibility to his fellow providers. He sees himself as a representative of all providers, sitting at the table with our organization’s leaders and IT leadership, advocating for interfaces and systems that help make their jobs easier.

“Our providers don’t have time to sit on the phone with the Service Desk or type an email to a technician,” Dr. Dues said. “If my team can build rules in Cerner and Epic that direct our providers to the quickest and easiest solution, then I’m doing my job right.”

One example Dr. Dues gave as to how he and his team are helping to improve our EHR systems is through rules in preventing medication errors. When the provider goes to order a medication based on the patient’s specific condition, the provider ideally should be presented with the simplest and most accurate options to include known variables like kidney function and the patient’s weight. Dr. Dues believes that providers should not have to be bothered with alerts or hard stops after completing the action; the choices should be limited upfront.

Getting to constantly improve our EHR systems is one piece of working at UofL Health that Dr. Dues enjoys, but the other is the overall understanding of our mission.

“I think because I started at UofL Hospital, and I’ve been with this system for so long, that I really understand our core purpose of providing the best care to the community,” Dr. Dues said. “It doesn’t matter who you are, what your condition or disease is, we’ll show compassion and are going to take care of you.”

Dr. Dues is also impressed with the expansion of UofL Health from its downtown campus to both the south, west and east ends of Jefferson County. It pleases him to see the UofL Health – Brown Cancer Center at UofL Health – Medical Center Northeast, along with the UofL Health – Urgent Care Plus locations our organization has planted across the county.

When Dr. Dues isn’t working as CMIO, you can find him pursuing his other passion: fine arts. He creates paintings and illustrations for fun, but he has also painted images for charities. He also dabbles in digital illustrations, using an iPad or laptop to create artwork.

Did you know that Dr. Dues was course director for several years, and continues to serve as faculty on a small, fourth-year medical student class called the Art of Wellness? During one of the classes, he would teach an interactive session called Van Gogh: Medical Theories and Myths. He presents the case of the famous painter as if presenting a history and physical during a fictional visit to the Emergency Department and discussing the differential diagnosis. The students learn both a little art history as well as medicine during the discussion.

“I read a study from Yale once that demonstrated how medical students observe patients better when they learn to observe art,” Dr. Dues said. “So, I created an exercise where I would show my students an art piece for five to 10 seconds and then take the piece away. I’d ask them questions about specific features of the painting like what was color of the woman’s dress, or how many figures were in the painting?”

With his love of art comes his love of music. In college, he was the drummer for some local rock bands that he’s sure you’ve never heard of with names like Knock Knock Mary and the Origami Boulders. He claims they weren’t very good, but he enjoyed it.

Dr. Dues hasn’t met a musical genre he didn’t like. But if pushed, he would probably sing karaoke versions of Tom Petty songs.

If you can’t find him in the office, you might find him down at the soccer pitch watching Lou City or Racing Louisville square off against a regional rival.

“I played soccer in high school, but coaching youth soccer for years really provided me a lot of tools that have helped me professionally,” Dr. Dues said. “Nothing gets you more organized and teaches more patience than coaching little kids.”

If you’re a provider and want to give your input on how we can better integrate Epic and Cerner, or just want to chat about post-impressionism or debate the best classic rock hits, be sure to find Dr. Dues and introduce yourself. He would love to get to know you!

Getting to Know Marianne Krueger
October 3, 2022

Getting to Know Daniel Rivera
September 19, 2022
Go to Top