Getting to Know Martha Mather 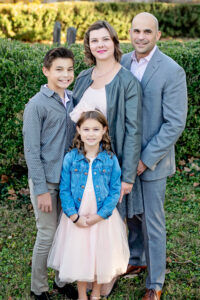 Martha transitioned to UofL Health in November 2019. She originally joined Our Lady of Peace in 2012. Her first job in a psychiatric hospital was in January 2001, where she was promoted to her first director-level role a little over a year later.

Martha is passionate about behavioral health and Peace Hospital. Her favorite thing about UofL Health is being part of an academic health care system. The work being done at Peace Hospital is essential to our community.

“We serve a large pediatric population to include youth with developmental delays and intellectual disabilities,” Martha said. “If you want a tour – call me. I’m confident you will be amazed at the depth of amazing work we do!”

With her competitive nature, it’s a goal of hers for UofL Health to be the No. 1 employer and provider of choice for metro Louisville.

Martha is originally from Lakeland, Fla. Growing up in central Florida, she also worked for Walt Disney World during her breaks while attending Florida State University (Go Seminoles!) Fun fact: She may or may not know how to properly autograph Pluto’s name.

If you find yourself in a group conversation with Martha, try to practice good conversation etiquette as interrupting another person while they are speaking is a pet peeve of hers.

One of Martha’s favorite quotes is from former first lady, Eleanor Roosevelt, “No one can make you feel inferior without your consent.”

Going out for karaoke? Be sure to have “Don’t Stop Believin’” by Journey on deck for Martha to jam out to.

When she is not working, Martha enjoys listening to Michelle Obama’s podcast on Spotify to relax. She also enjoys challah bread with soft butter and honey, as she could eat it every day. If she happens to also have either The Glass Castle by Jeanette Walls or Educated by Tara Westover in hand to read, she is in total bliss.

If you see Martha, don’t forget to take her up on that tour. You can also invite her out for breakfast with pancakes and bacon and talk true crime stories or maybe joke about the last season of Arrested Development.